I am a big fan of an Italian film named Diabolik, which was directed by the super-stylish Mario Bava back in 1968. In the film, John Philip Law plays a super-thief who basically robs people and is a general nuisance while looking ridiculously cool. There’s even a scene where he canoodles with his girlfriend in a giant, rotating, circular bed completely covered in money.

Anyway, in 1997, the Beastie Boys made a song called “Body Movin'”, and they made a music video for it that re-stages several scenes from Diabolik: 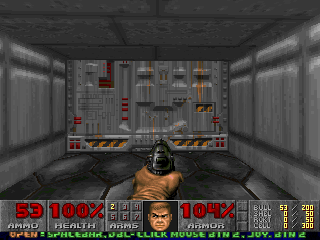 Yes! That’s one of the sounds from a video game called DOOM. You may have heard of it. And you’ve probably heard its doors in many other places.