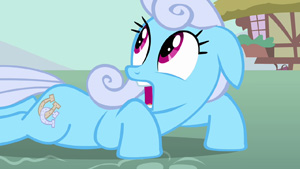 Our eagle-eared correspondents are wild for the Wilhelm Scream this week!

From Jerry B: “Just heard [the Wilhelm Scream] in an opening cutscene for God of War III on the PS3.”

That is indeed a Wilhelm Scream! A cursory glance at YouTube suggests that there are Wilhelms all over the place in God of War III.

From Annie L: “We actually used the Wilhelm scream in my band’s cover of “Rock Lobster.” That was the first I’d heard of it – thanks for providing this write-up. :-)”

Pirates for Sail covered “Rock Lobster”, and the scream shows up at the very end of the track. Yar!

From Mandydax: “I think [the Wilhelm Scream] was one of the death screams in the original Command and Conquer. Also, if I’m not mistaken, it was in at least one episode of My Little Pony: Friendship Is Magic, but I’d have to track down the scene to give you a YouTube reference.”

I couldn’t find a clear sound bite from Command and Conquer online, but a lot of people on the ‘net have heard the Wilhelm in the game. From what I can gather, the game features a lot of screaming.

The Wilhelm apparently shows up all over the place in MLP:FIM. This video points out three instances.

I knew it was only a matter of time until MLP:FIM showed up in a post here.

Mandydax also found examples of the Villains Theme: “I’m pretty sure I’ve heard that “sneaky music” in Looney Tunes cartoons. It probably predates those, too, but I knew I’d heard it in one of the Squirrel Nut Zippers’ songs, and I tracked it down to the title track from Bedlam Ballroom. http://www.youtube.com/watch?v=ne0fKb_HxGI It’s the very opening of it.”

I know for certain that I’ve heard the Villains Theme in Looney Tunes, too, but I’m having a hard time finding exactly where. Surely this means I need to rewatch all the Looney Tunes cartoons. Oh, tragedy!