Inquisitive reader Roho writes: “*doot-doot-doodeedoodee-doot-doot-doooo-doot* If it’s not already on your list, I’d love to see a look into ‘Entry of the Gladiators’.”

[Ringmaster Voice] Ladies and gentlemen, children of all ages, step right up and guide your ears toward this blog as the circus music is about to begin! [/Ringmaster Voice]

Most folks know this tune only as “circus music” or “merry-go-round music”. It is often heard pounded out of horn ensembles, marching bands, and calliopes, usually before clowns start running around and frightening small children. However, the original piece had nothing to do with circuses.

That is a snippet of a 1897 military march by Julius Fučík (pronounced “FOOT-sheek”). It was originally titled Grande Marche Chromatique, but was later renamed Entrance of the Gladiators because Fučík had a thing for Romans. (The clip above is from a recording by the Cincinnati Pops Orchestra under Erich Kunzel. You can hear the whole thing here.)

Thirteen years later, a Canadian composer named Louis-Philippe Laurendeau came along and adapted Entrance of the Gladiators for a small band and re-titled it “Thunder and Blazes”. This adaptation of the music sold widely, and was picked up by circuses and used as a “screamer march” and as music for fairground organs and calliopes.

Julius Fučík was born in Prague, Czechoslovakia in 1872. As a student, he studied composition under none other than Antonín Dvořák, a man who is now known as one of the more influential composers of 20th century music. In 1891, Fučík struck out into the world to work as a musician and composer for several military bands, working at one point under Josef Wagner, another famous military composer in his own right. (Wagner is the man who wrote the Under the Double Eagle march, which Monty Python nerds know from Terry Gilliam’s animations of dancing teeth.)

In 1897, Fučík wrote Entrance of the Gladiators while working in the Czech army as bandleader for the 86th Infantry Regiment in Sarajevo.

In 1907, he wrote another popular march, the Florentiner March. While that piece of music never reached the memetic fame of Entrance of the Gladiators, it is a popular repertory piece for military bands today.

Fučík became a renowned bandleader during his career. By the time Laurendeau’s “Thunder and Blazes” hit North America, Fučík was in Bohemia as the bandmaster of the 92nd Infantry Regiment in Theresienstadt, one of the finest bands in the Austro-Hungarian Empire. In 1913, he proceeded to create his own band and music publishing company, Tempo Verlag. (Note: there is an unrelated Czech music publishing company named A-Tempo Verlag, which was founded in 1993.)

Unfortunately, World War I eventually arrived and ruined everything. Fučík’s business and health failed in wartime. He died of cancer in 1916 in Berlin, Germany, aged 44. He is buried at Vyesehradsky Hrbitov in Prague. 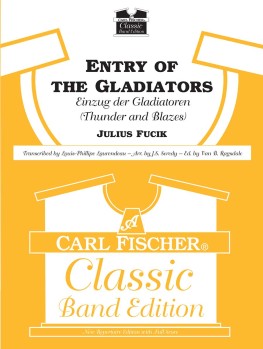 Louis-Philippe Laurendeau was a Canadian composer, bandmaster, writer, and music publisher. Born in 1861 in Quebec, Laurendeau died in the same year as Fučík: 1916.

Most of Laurendeau’s arrangements were published under Cundy-Bettony (a now-defunct Boston-based music publisher) or Carl Fischer, a music publisher where Laurendeau held an editorial position. (Carl Fischer, incidentally, is still in business today, 140 years after its birth. Based in New York City’s East Village, the company is still family owned and serves 1,400 retailers.)

Laurendeau made the smaller-band arrangement of Fučík’s Entrance of the Gladiators in 1910, publishing it as “Thunder and Blazes” under Carl Fischer. In the original publication, the piece is credited to “Fučík-Laurendeau”.

Wikipedia has this description of the musical construction of Entrance of the Gladiators:

Generally, the march is divided into three parts. The first part contains the melody that the trumpet keeps and the several supporting parts. The second third is the section where the low brass (mainly the tubas) take over with the chromatic scale like role. Finally there is a trio, or a slow melodic section, where there is a strong balance between woodwinds and low brass. The trio has a part similar to the second third with a chromatic scale like sound. The piece is written in cut time and is originally written to be played at standard march tempo; however, when played as a screamer it is usually played much faster.

Okay, time for a translation for the people who aren’t already music nerds.

A chromatic scale is a musical scale with twelve pitches, each one semitone above/below one another. Modern Western music is mostly written with notes set on a chromatic scale, with each note equidistant from its neighbor in terms of tone. (This wasn’t always the case. If you want to really fall down the rabbit hole of the internet, start looking into arguments about things like Pythagorean tuning and just intonation.) In other words, if you look at a modern piano, the white and black keys all fall on a chromatic scale. If you start play one piano key and then play the next 11 keys above that, you will arrive at the same note, except one octave higher than your starting point. In Entry of the Gladiators, you can hear the woodwinds and horns swoop up and down all the notes on the chromatic scale.

(If you want a visual aid for this, check out this video of Entrance of the Gladiators being played on a piano roll.)

A time signature tells a musician two things: how many beats there are in a measure, and what sort of note represents one beat. In the image of a 3/4 time signature above, there are three beats in each measure, and a quarter note represents one beat. The three notes you see above, with the stems and filled dots, are quarter notes, so you see one full measure represented. In a full piece of music, multiple measures are strung together to form musical patterns and melodies.

Back to cut time. A time signature of 2/2 says that there are two beats per measure (top number), and that a half note (stem with an open circle) is one beat. Cut time is also known as alla breve, and is often found in marches.

Tempo is the speed at which each beat is played. “March tempo” is 120 beats per minute, a simple 2 beats per second. But the Wikipedia bit says that Entry of the Gladiators is played faster when it’s played as a “screamer march”, so what is this “screamer march” thing?

A screamer march is a particular breed of march, one of those exciting, upbeat, barn burner marches favored at circuses.

The Wikipedia article contains a long list of other interesting screamer marches, in case you want to be whipped into a frenzy of excitement.

Circuses originated in ancient Roman times. Originally, a circus was a building, made for the purpose of exhibitions: horse shows, battle re-enactments, and whatnot. Think of the chariot race in Ben-Hur: that oval track is a Roman circus.

The word “circus” came to mean a performance instead of a building during the 18th century. It was at this time competing equestrian shows were touring around Europe. In 1872, Charles Didbin and Charles Hughes, opened a show named Royal Circus on November 4, 1782 in Lambeth, London, England. The show was meant to compete with Philip Astley‘s Amphitheater of Equestrian Arts, which was just a short distance away. Astley’s show, which involved jugglers and clowns as well as horses, established the structure of the modern circus, but Didbin is the person who actually gave the term ‘circus’ its modern meaning.

The circus was again revolutionized in the United States when a man named P. T. Barnum came along. Barnum was 61 years old when he established “P. T. Barnum’s Grand Traveling Museum, Menagerie, Caravan & Hippodrome” in Delavan, Wisconsin in 1871 with partner William Cameron Coup. In addition to the usual clowns, jugglers, and animals, Barnum’s circus invented the “three ring circus” setup, as well as the inclusion of a “freak show”.

It was under Barnum’s watch that circuses became a cultural phenomenon in North America. Barnum was one of the shrewdest marketers in all of history, becoming known as the Shakespeare of Advertising.

If you note the dates, the Ringling Brothers and Barnum & Baily circuses were both running strong by 1910, when “Thunder and Blazes” was published in the United States. While it is undocumented which circus or circuses picked up the song, it is interesting to note that the song’s publication happened just as circuses were becoming a part of the American pop culture history, which probably explains why the song is so strongly associated with circuses.

The theme appears in Sonic the Hedgehog games as part of the Mystic Cave Zone music. (You can hear the whole thing here.)

WWF wrestling character Doink the Clown, originally played by Matt Osbourne starting in 1992, uses a fairly standard version of Entrance of the Gladiators as his theme.

The Cirque du Soleil show La Nouba (the one housed at Disney World) includes a snip of the theme during Act One’s chair-balancing act. (You can hear the whole thing here.)

The theme appears in the film Mary Poppins (1964) as part of the song “Jolly Holiday”. (That’s the one with the dancing penguins.) In the video clip below, the theme shows up at 2:04, as played by Richard Sherman on kazoo.

The theme is all over a 1967 episode of The Monkees called “Monkees at the Circus”. You can watch the whole episode below, but you’ll notice that the theme appears even before you get to see Monkees.

James Bond fans might recall one of the lower points in the history of 007, wherein Mr. Bond (as played by Roger Moore) faces circus villains in a film named Octopussy (1983). (At 1 hour, 25 minutes into the film, you can also hear John Philip Sousa’s Liberty Bell March, also known as the theme to Monty Python’s Flying Circus.)

Singer James Darren had a hit in 1961 called “Goodbye Cruel World”, which uses the theme intermittently between lyrics about running away to join the circus. (You can hear the entire song here.)

Singer Leon Russell made an album named Carney in 1972, which hit #2 on the charts in the US and went gold. The song “Tight Rope” includes an extremely slowed version of Entrance of the Gladiators during the bridge. (You can hear the entire song here.)

Leo Sayer and David Courtney used the theme as an opening for their song “The Show Must Go On” in 1974. (You can hear the entire song here.)

…which later became a hit for Three Dog Night in 1974. (You can hear the whole thing here.)

The Gladiators theme also opens a song called “Sideshow” by Blue Magic, which was also released in 1974. (Crazy circus things must have been going on in 1974.) (You can hear the whole song here.)

Gwen Stefani’s 2006 song “Don’t Get It Twisted” also begins with the Gladiators theme woven into the opening lyrics. (You can hear the entire song here.)

And, finally, you can hear a clip of the Entrance of the Gladiators theme within Boots Randolf‘s “Yakety Sax” (aka that Benny Hill song), a song that probably deserves its own entry here at The Sound and the Foley. (You can hear the entire song here, though beware of marauding gorillas and scantily-clad ladies.)

Where else have you heard Entrance of the Gladiators?