(Note: an obviously unfinished version of this article accidentally went live on Tuesday. This one is the real deal.)

A few days ago, I wrote a post wherein I mentioned the Tarzan yodel:

Striking and iconic, the Tarzan Yell is one of the most famous sound effects in the history of film, recognizable even to people who’ve never seen an actual Tarzan film. But where did it come from?

A BRIEF HISTORY OF TARZAN

The fictional character of Tarzan, a feral child raised to manhood by African apes, first appeared in the pages of Tarzan of the Apes, a novel that was first published in 1912 in the pages of All-Story Magazine. (This magazine, through a series of mergers and alterations, eventually became a famed pulp magazine named Argosy. This publication is one of the first, if not the first, American pulp magazine.)

The author of Tarzan of the Apes, Edgar Rice Burroughs, eventually had the novel published on its own in 1914. The book was so enormously popular that is spawned an astonishing 25 sequels.

The Tarzan yell is first described in the Burroughs novels, as something like “the victory cry of the bull ape.” (Since the term “ape” is pretty general, I don’t have a reference sound for that, but here’s what chimpanzees sound like.)

Burroughs’ tales of epic adventure in exotic locations was a natural fit for the then-infant industry of film. By 1918, the first Tarzan film emerged: a faithful adaptation of Tarzan of the Apes, starring Elmo Lincoln as Tarzan. However, the film was silent, so audiences could only imagine Tarzan’s victory ape-yodel.

Six more silent films appeared, as well as a 1921 Broadway stage production, which starred Ronald Adair as Tarzan. Presumably, the first interpretation of the ape-man’s cry officially graced the ears of audiences during this stage show, but we don’t have any recordings of it.

Tarzan’s first foray into sound recordings came in the form of Tarzan the Tiger of 1929. Tarzan the Tiger was a film serial of 15 episodes, which was originally filmed as a silent feature. When the film industry converted to sound features nearly overnight, music and some sounds were dubbed in before release.

Three years later, the first true sound-era Tarzan feature appeared, in the form of Tarzan the Ape Man (1932), starring Johnny Weissmuller as Tarzan. Weissmuller would eventually star in 12 Tarzan films, often alongside Maureen O’Sullivan, with whom he shared some pretty crackling onscreen chemistry.

Also in 1932, a Tarzan radio series appeared, starring James H. Pierce. An adaptation of Tarzan of the Apes, which aired three times per week and ran for a total of 77 episodes.

The character exploded in popularity during the 1930s, and continued to capture audiences during the century after the first novel was published. Tarzan has been featured in around 90 feature films, as well as TV and radio series, anime, video games, and songs.

THE HISTORY OF THE YELL

Edgar Rice Burroughs’ description of the yell provided a lot of room for interpretation. You might be surprised to hear how it sounded in its first recording, in Tarzan the Tiger (1929):

When you stop giggling, you might note that the radio serial was going for the extraordinary yodel of Weissmuller, but not quite getting there. Also, according to Wikipedia, “the yell sounds like ‘Taaar-maan-ganiii’. In the ape language mentioned in the Tarzan novels, ‘Tarmangani’ means ‘White Ape’.”

In 1933, another competing Tarzan franchise appeared: a movie serial starring Buster Crabbe as the ape-man. Through a strange kerfuffle with rights to the original Edgar Rice Burroughs work, both MGM and Sol Lesser wound up with film rights to Tarzan. MGM paid Lesser to let them release their work first (the Weissmuller film), so Lesser started turning out Tarzan serials the next year, as Tarzan the Fearless (1933). Lesser’s production couldn’t use MGM’s Tarzan Yell, so here’s the Buster Crabbe version:

(If you want to see the first four episodes of Tarzan the Fearless edited into a single film, here it is. Buster Crabbe’s yell happens immediately after the opening credits.)

By 1935, another contender entered the ring: a film serial called The New Adventures of Tarzan, starring Herman Brix (aka Bruce Bennett). Brix seems to have borrowed his yell from the radio serial:

Then in 1938, yet another competing film came out, by the name of Tarzan’s Revenge, starring Glenn Morris. Morris’ call is less silly, but still…

After that, the non-franchise Tarzan films petered out, and so the MGM/Weissmuller yell took over. Even Disney used it:

Okay, I can’t resist. Did you know Tarzan’s lady-friend, Jane, also had her own yodel?

Yup. That’s from one of the Weissmuller films that co-starred Maureen O’Sullivan.

HOW THE WEISSMULLER TARZAN YELL WAS MADE

I’ll start off by saying that ERBzine’s article about the Tarzan yell contains an excellent, extremely detailed history of the yell’s creation. I’ll summarize below, but if you want even more detail, click that link.

The short, short version of this section is: we don’t really know the true history of how the yell was made.

1. Johnny Weissmuller himself recorded the yell. This is the official version of the story put out by the studio. The story is also corroborated by his son and his frequent co-star Maureen O’Sullivan.

4. According to journalist Bill Moyers, it was created by combining the recordings of three men: one baritone, one tenor, and one hog caller from Arkansas.

5. According to the newspaper columnist L. M. Boyd (circa 1970), “Blended in with that voice are the growl of a dog, a trill sung by a soprano, a note played on a violin’s G string and the howl of a hyena recorded backward.”

6. Tom Held, an MGM film editor, claimed that the yell was a combination of many different sound tracks, each laid upon the other: Johnny Weissmuller’s voice, the howl of a hyena, the bleat of a camel, the growl of a dog, and the plucked sound of a violin G-string.

Whatever the true story is behind the sound clip, Johnny Weissmuller actually could perform the yell himself. There are many reports of people who met Weissmuller himself and heard Weissmuller perform the yell upon command. The video below is a segment from a documentary Tarzan: Silver Screen King of the Jungle: 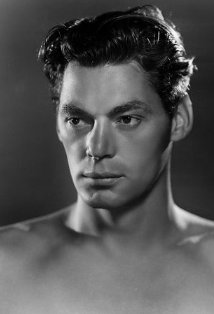 Johnny Weissmuller was an interesting fellow in his own right.

Weissmuller was born in the Austro-Hungarian Empire in 1904, under the name Peter Johann Weissmüller. His family emigrated to the United States in 1905.

At age nine, Weissmuller contracted polio, and started swimming to combat the disease. He soon became quite good at competitive swimming — to the point where he won the national championships in the 50-yard and 220-yard distances in August 1921. This qualified him to compete on the Olympic team.

By this time, Weissmuller was going by his younger brother’s name, Johnny, because brother Johnny was an American citizen by birth. If he hadn’t done so, he would have been unable to compete as an American in the Olympics.

On July 9, 1922, Weissmuller broke Duke Kahanamoku’s world record on the 100-meters freestyle, swimming it in 58.6 seconds. He won the title in that distance at the 1924 Summer Olympics, beating Kahanamoku for the gold. He also won the 400-meters freestyle and the 4 x 200 meters relay. As a member of the US water polo team, he also won a bronze medal. Four years later, at the 1928 Summer Olympics in Amsterdam, he won another two Olympic titles.

In all he won five Olympic gold medals and one bronze medal, fifty-two United States National Championships, and set sixty-seven world records. He never lost a race and retired with an unbeaten Amateur record. In 1950, he was selected by the Associated Press as the greatest swimmer of the first half of the 20th Century.

In 1929, Weissmuller signed with BVD to become an underwear model. When he, with no previous acting background, signed a seven-year contract with MGM to make the Tarzan films, MGM had to strike some deals with BVD so they could show Tarzan running around in a loincloth instead of underpants. Weissmuller was an instant hit as the ape-man.

Weissmuller’s acting career faded after the 1940s. By 1973, he was a greeter at Caesar’s Palace in Las Vegas. He broke his hip in 1974, which was the start of his declining health. He eventually passed away ten years later in Acapulco, Mexico.

When he was laid to rest at Valley of the Light Cemetery in Acapulco, a recording of the Tarzan yell he invented was played three times as his coffin was lowered into the ground.

THE TARZAN YELL IN THE WILD

In 1967, the TV show George of the Jungle, a cartoon creation by folks who also gave us Rocky and Bullwinkle, was entirely a spoof of the Tarzan empire. The show’s theme song includes a parody of the Tarzan yell, as seen in the video below. “Weird Al” Yankovic later published a cover of the theme song that also includes the parody yell. And then, when a George of the Jungle movie was made with Brendan Frasier in 1997, The Presidents of the United States of America also recorded a cover of the song.

In 1969, Ray Stevens recorded a novelty song called “Gitarzan”, which tells the tale of Tarzan through scat singing, boogie woogie, and various silly sounds. The Tarzan Yell appears as a recurring motif during the song. (You can hear the whole thing here.)

In 1982, Atari released a fondly remembered computer game called Pitfall!, which used a not-quite-Tarzan-Yell piece of music whenever Pitfall Harry swung on a vine:

You can also hear the call used to “dubious comedic effect” (Wikipedia’s words) in the James Bond film, Octopussy (1983). It’s used as Bond is swinging between trees while being hunted in India by Kamal’s men.

In fact, 1983 was a prime year for horrid use of the Tarzan Yell. At a sad and terrible point in the Star Wars film series, Chewbacca utters the Tarzan yell while swinging on a vine on Endor. Behold the Tarzan Yell of Return of the Jedi (1983):

…Not that that’s the last time you hear the Tarzan Yell in the Star Wars movies. You can also hear it coming out of a wookie in Star Wars Episode II: Revenge of the Sith (2005).

Finally, I shall close with Carol Burnett, because Carol Burnett is amazing. Also, she was quite well-known for her take on the Tarzan yell. Check out this video, which is a compilation of clips from the Q&A section of The Carol Burnett Show. The whole thing his hilarious, but the Tarzan bit begins at 4:40.

Where have you heard the Tarzan yell lately?